Hey everyone! I'm so happy to share part 2 of my European Travel Diary with you all. If you missed part 1 you can check it out here!

As I mentioned in the last post my dad and I traveled from London to Paris on the Eurostar. The Eurostar train is such an amazing experience! The train travels through the English Channel and goes extremely fast! I was also amazed how nice the seats were. I'm not a frequent train traveler so the large amount of space between the seats, and even the bathroom, was amazing.

After a 2 hour train ride we were in Paris! My first impressions of Paris were definitely not what I expected, but at the same time it was exactly what I expected. 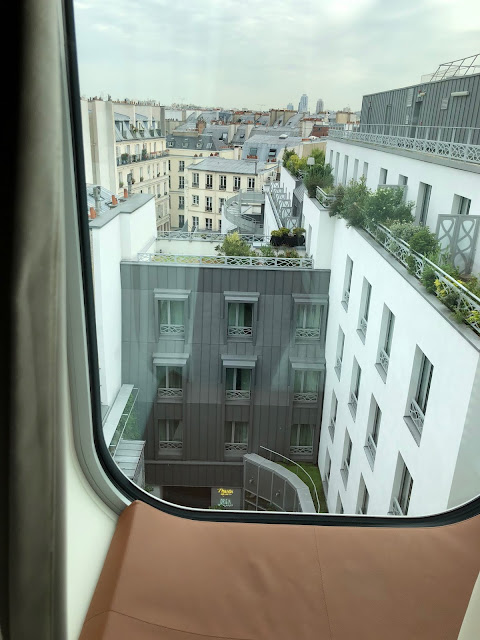 The view from our hotel room was so beautiful! There was also a seat inside of the window that allowed you to see so much of the city.

After we put our things in our hotel room we went out to Republique Square (the area where our hotel was) to get groceries and get a feel for the city. Republique Square is like a scene out of a movie. There's music, salsa dancing, street vendors, and so much more. Everyone in Paris drives like maniacs whether its in a car, Vespa, or bike. There was so much culture in just this one little area of Paris.

After we grabbed our groceries we went to dinner. There is a cafe almost every 50 ft in Paris. We picked one right by the square. This is when we discovered that dinner is not served until around 9 or 10 p.m. in Paris. Everyone takes their time to eat and you don't just get a check after you eat you have to ask the server for it. This was definitely one culture shock about Paris. This night was also when I realized almost everyone smokes AND has perfect skin. I still don't understand how! 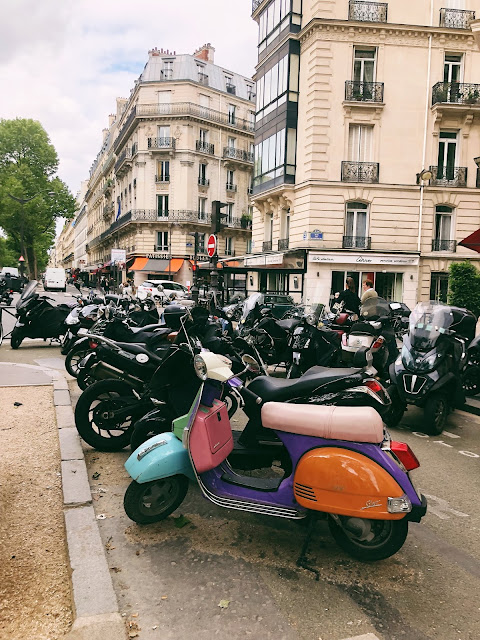 Our first full day in Paris was spent on another hop-on hop-off bus. This bus took us all around the city. 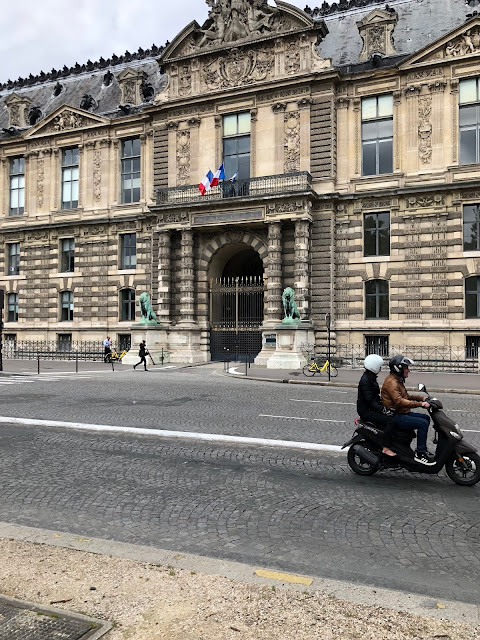 We stopped outside of the Louvre and it was like a movie.The architecture is absolutely stunning! 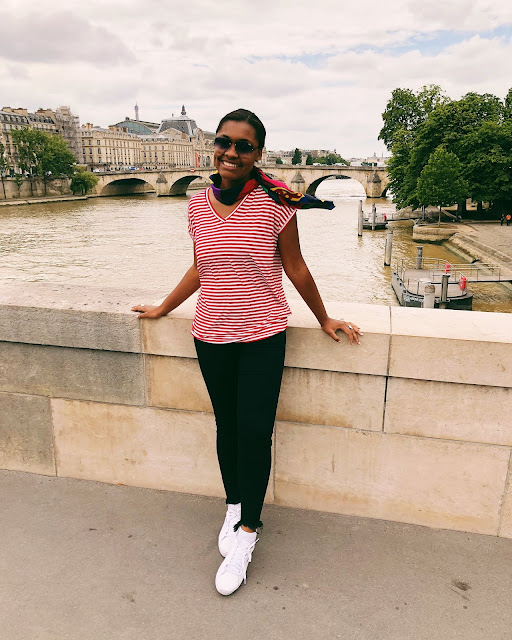 Across from the Louvre you can see the Seine River from this bridge I'm standing on. We actually got a little lost after taking this picture because we could not find another bus stop! 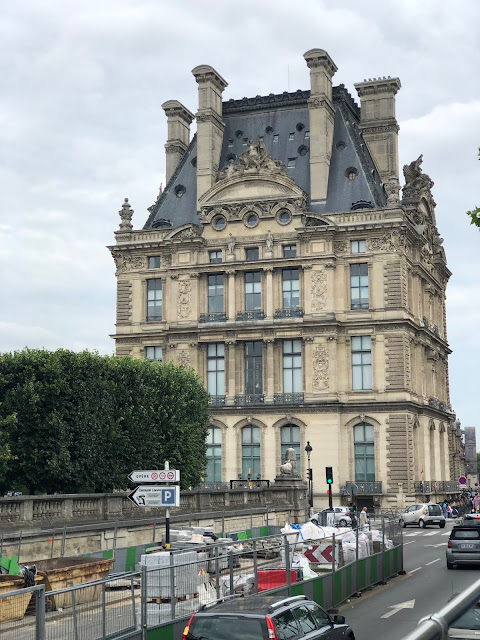 After we found our bus stop we were off to lunch on Les Champs-Elysées. 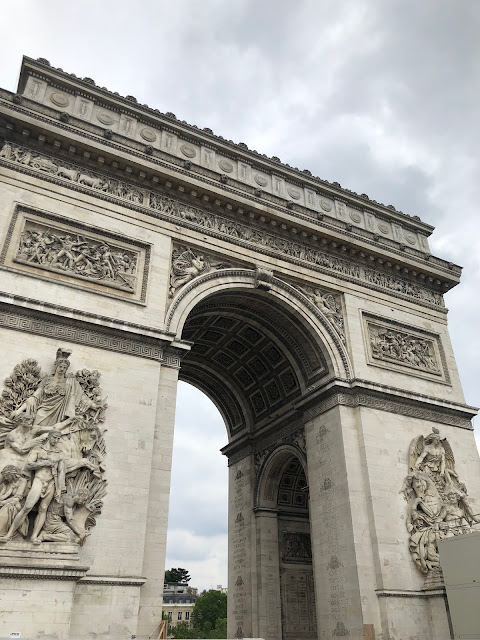 Before we went to Les Champs-Elysées we saw the Arc du Triomphe. It's so beautiful but I would not try to take a picture with it in the background; there are cars and scooters everywhere. 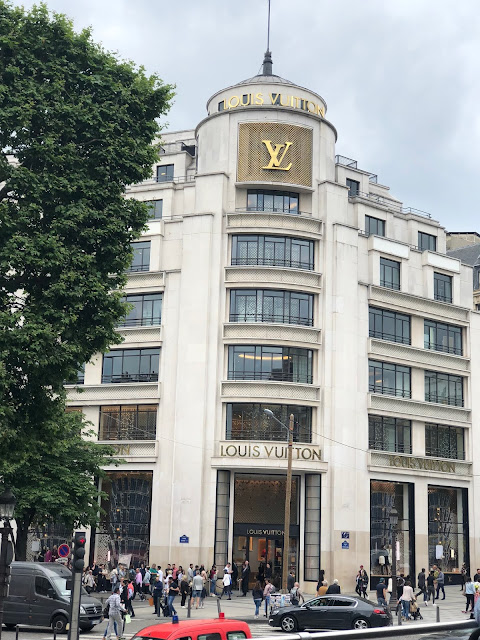 The Louis Vuitton on Les Champs-Elysées is huge! There was even a line to get in. 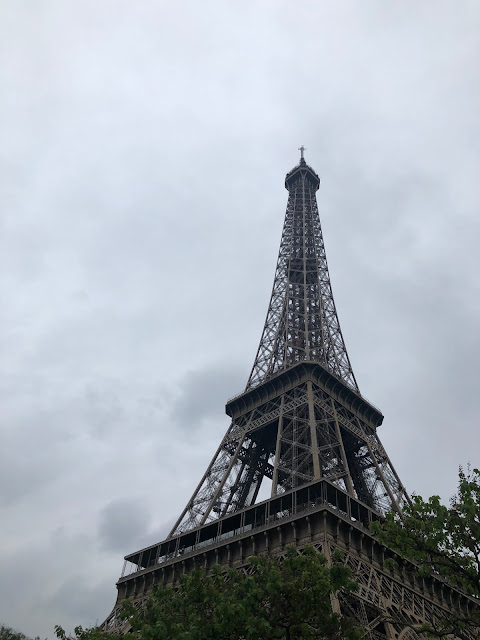 After we got back on our bus we rode past the Eiffel Tower. Many parts of Paris smell like cigarettes and pee; but everything around the Eiffel Tower smells like fresh roses and peonies! 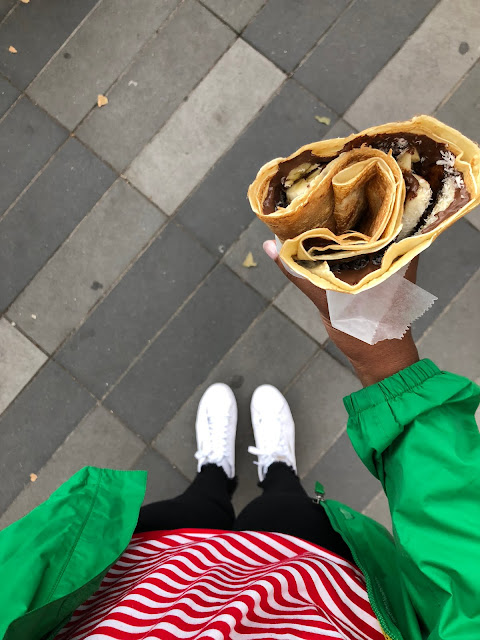 Crepe stands are everywhere so we stopped at one by our hotel for "dinner". French crepes are so good. My crepe had Nutella, banana, and coconut!

The next day was one of my favorite days in Paris. 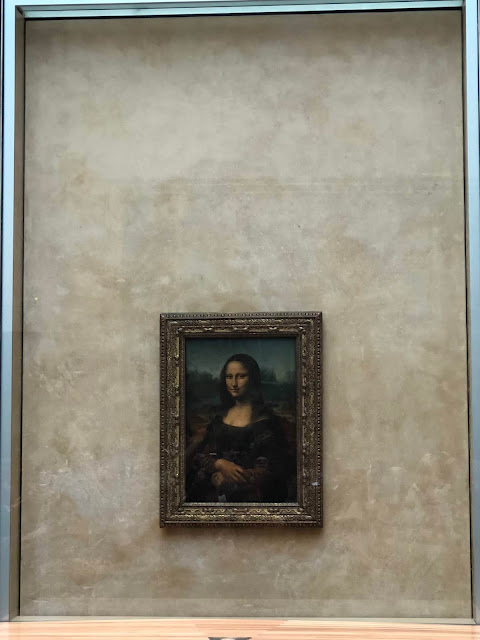 This day we actually went inside of the Louvre. I don't normally like museums too much but, this was amazing! It's so crazy to me how old and beautiful all of the art and architecture is at the Louvre.

After we finished the museum we went to the mall inside of the Louvre (crazy right?!). The mall inside also had a food court where we decided to eat. I did a little shopping at the mall in the Louvre. There was a Caudalie store. One thing most people don't know about me is that I love Caudalie skincare! 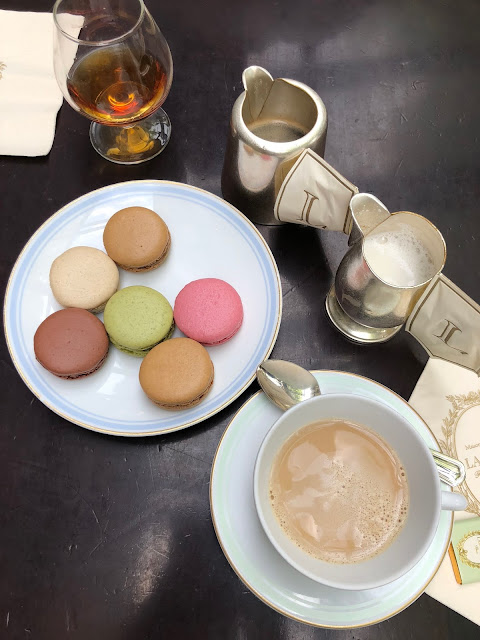 After we finished at the Louvre we went to the Laduree on Les Champs-Elysées. I have always wanted to go to a Laduree and I thought what better place to go than in Paris! This location was absolutely gorgeous and the macarons were so good! 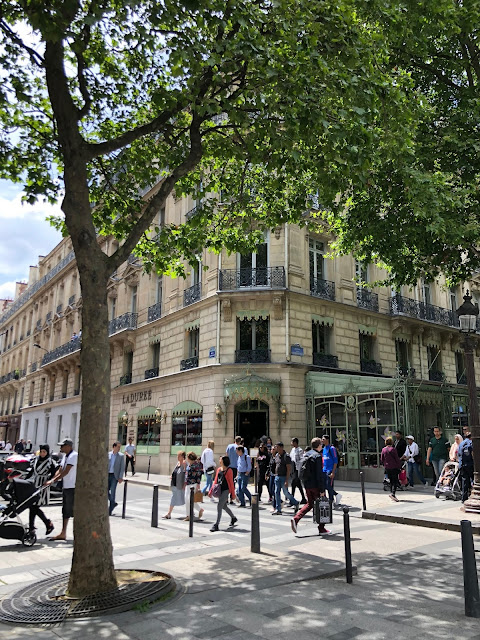 After Laduree we went to the Longchamp store next door. I bought a really pretty le pliage tote here; look out for it in an upcoming blogpost! 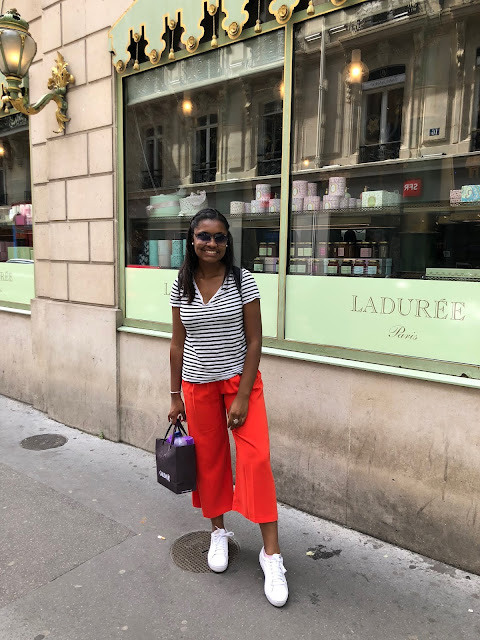 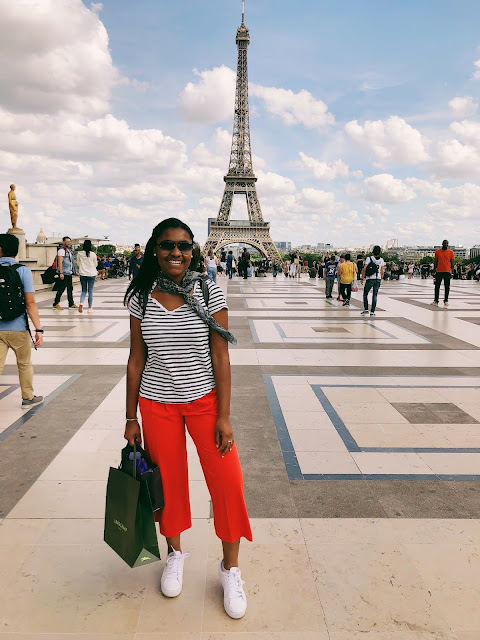 After leaving Les Champs-Elysées we went to an Eiffel Tower viewing spot nearby. It actually wasn't too crowded so I was able to get some pretty cool pictures! The weather stayed in the seventies the entire time we were in Paris this made the trip even more great. 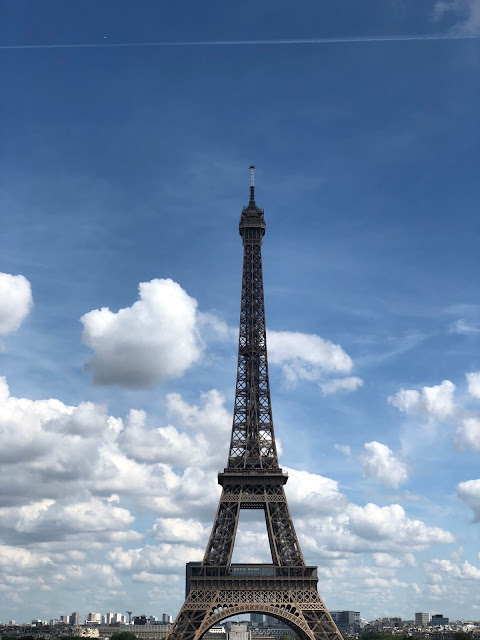 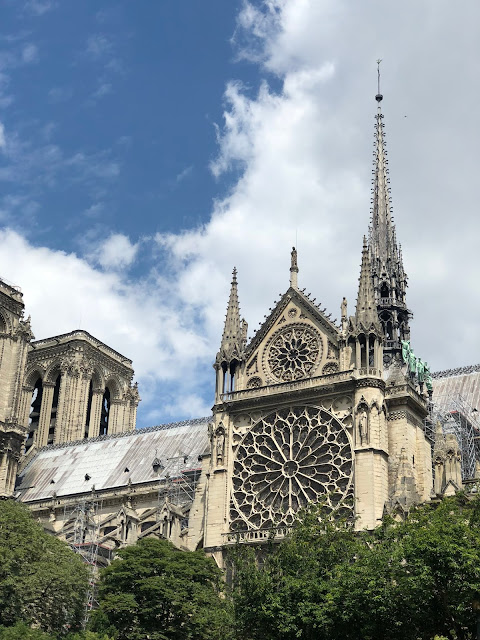 The next we took a boat on the Seine River to Notre Dame Cathedral. Afterwards we went back to Laduree because it was TOO good! This time I tried rose ice cream and it was perfect. 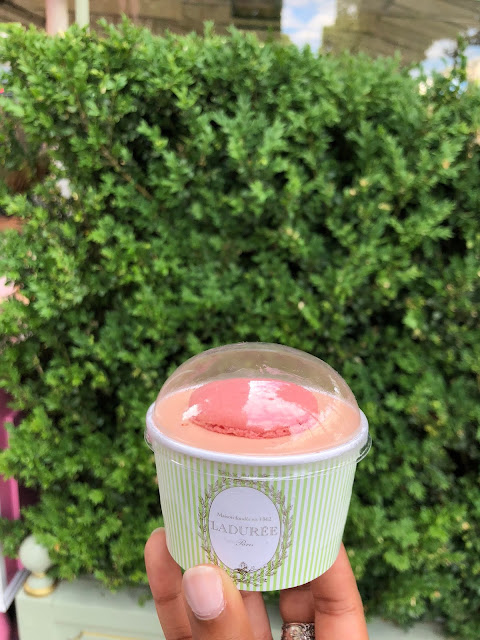 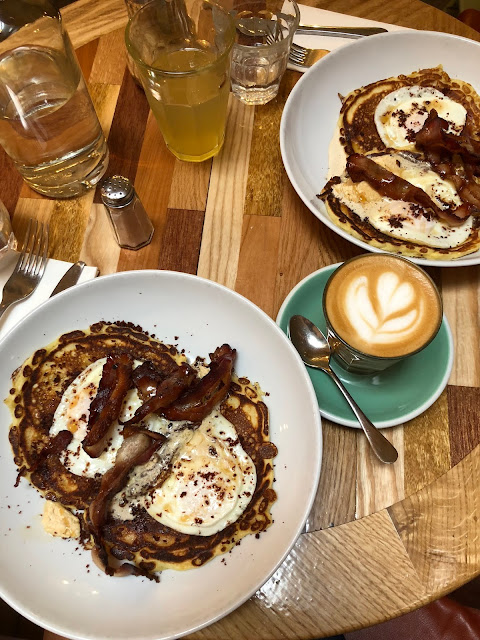 On our last day in Paris we walked to a brunch place called Holy Belly. At this point we were kind of over French food so I was so happy when I found this place on Yelp. Apparently Holy Belly is the place to be on weekends. The line was down the street! The food, music, and aesthetic of the entire restaurant was so fun! Both my dad and I ordered the savory stack on pancakes. 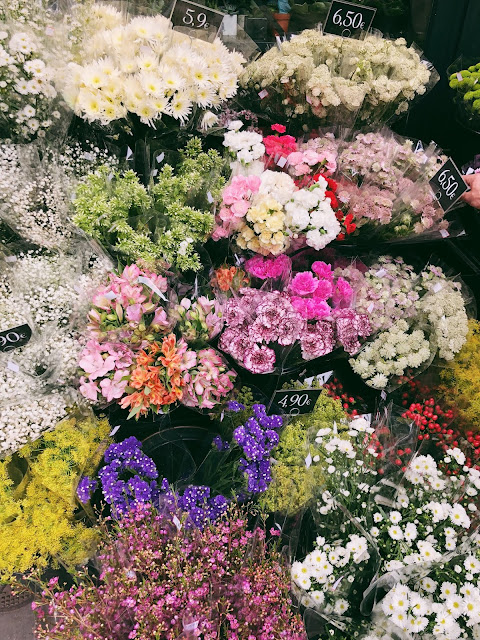 On the way back to the hotel I saw this beautiful flower stand on the side of the street.

After our brunch we went to Printemps department store. The rest of the day was spent packing for our journey back home!

My trip to Europe was absolutely incredible! Paris is full of so much culture I recommend everyone to go at least once if you get the chance. It amazed me that some people speak 3 and 4 different languages. Paris was so different than I expected but I really did love it!

Thank you so much for visiting my blog, it means so much to me!

Posted by Kayla Tollerson at 12:38 PM